THE OTHER SIDE OF EVERYTHING 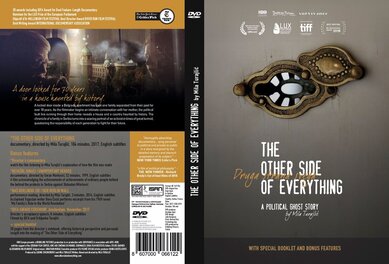 The DVD of The Other Side of Everything is now available in two versions - French and English!

The French-language version can be ordered from Survivance or purchased in stores in France.


DVD contents
*THE OTHER SIDE OF EVERYTHING
documentary, directed by Mila Turajlić, 104 minutes, 2017, Serbian language with English subtitles
Bonus features
*Director’s commentary
watch the film listening to Mila Turajlić’s explanation of how the film was made
*NEVAŽNI JUNACI / UNIMPORTANT HEROES
documentary, directed by Goran Marković, 52 minutes, 1999, English subtitles
A film acknowledging the achievements of of ordinary people behind the protests in Serbia against Slobodan Milošević
*NAŠ BERLINSKI ZID / OUR BERLIN WALL
performance reading, directed by Mila Turajlić, 3 minutes, 2014, English subtitles
Acclaimed Yugoslav writer Bora Ćosić performs excerpts from his 1969 novel “My Family’s Role in the World Revolution”
*IDFA AWARD CEREMONY, Amsterdam, November 2017
Director’s acceptance speech, 8 minutes, English subtitles Filmed by IDFA and Srbijanka Turajlić
+ special booklet
28 pages from the director’s notebook, offering historical perspective and personal insight into the making of “The Other Side of Everything”